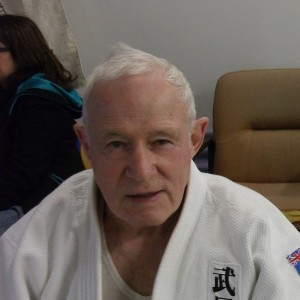 Pat Sensei was born on 20 April 1930 in Gillingham, Kent, in England. He often jokingly cites the fact he shares this birth date with both Hitler and Napoleon. Another notable native of Gillingham, also with a strong Japanese link was Will Adams (1564–1620), the only non-Japanese in history to be granted Samurai status.

Patrick spent most of his childhood in Weymouth, Dorset.

He served in the Royal Marine Commandos serving in Malaya during the 1950s.

Patrick has a strong bond with Japan, forged when he first visited the country in 1951. Since then, he has made several return visits to partake in both study and competitions.

Patrick has a rich history in martial arts and a unique connection with Japan.

Laconic by nature, and not one to name drop, the fact remains that Patrick has in his time trained under some of the greats of Japanese martial arts. During his sojourn in Tokyo in the 1960s, he was privileged to train at the Kodokan during the end of the Kyuzo Mifune era and was present during the great man’s funeral in the grand dojo at the Kodokan. Patrick received tuituion from Donn Draeger in Judo during this time. He also received his 2nd Dan and branch instructor’s grade in Kyokushin Karate from Mas Oyama and was also fortunate enough to train under the eccentric O Sensei, Morihei Ueshiba in Aikido.

Patrick was captain of the New Zealand Judo team in 1966, and training partner for Rick Littlewood during Rick’s build up to the 1972 Olympics.

He was inducted into the New Zealand Martial Arts Hall of Fame in 2000 along with Rick Littlewood, his close friend of many years.

His contribution to New Zealand Judo was recognised with his promotion to 7th Dan in 2008.

In 2009 he was awarded a life membership of the NZJF.

His 80th Birthday in 2010 was attended by many of his friends and students from over the years where tributes flowed and memories were shared by both Patrick and the many people whose lives he has and continues to be a huge part of.

From the 1950s through to present day Sensei Pat has been a coach, mentor, inspiration and friend to the many who have trained under him.

Many of Patrick’s reminiscenses of his time on the Wellington Martial Arts scene are collected in the History page of this website.

LOCKDOWN CHALLENGE 🔥How fast can you tie your