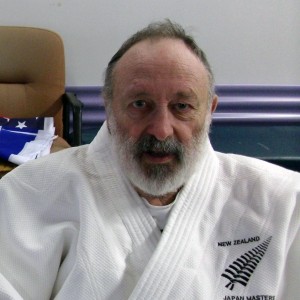 Sharing the same birthday as Patrick Toner, Terry was born in Wellington in 1938.

In his own words:

I started my Judo career in about 1965 in Birkenhead, Auckland. My next-door neighbour introduced me to Judo. The club was in a school hall and we trained on genuine Japanese tatami mats made of straw. We had to lay them out for each practice and put them away under the stage at the finish. The mats were very heavy! Our instructor was a Shodan from England called Doug Day. Later on I sometimes went into Newmarket to practice at the dojo of Lawrie Hargreaves. At this dojo were foam rubber tatami that stayed down all the time.

Due to my work I moved back home to Wellington and joined the Judo Club at the YMCA on Willis St – refer to Pat Toner’s history. In 1977-78 I spent a year in London and practiced at a club with a coach named Paul Randall, Shodan. There I met Hiroshi Ikenaga. On returning to Wellington I re-joined the YMCA club and as I was living in Miramar close to John Haanstra joined the dojo at Miramar Judo Academy. The dojo was contained in a double garage, which as the club grew in size became too small. Part of the reason for the growth was John teaching Jujitsu as well as Judo.

To get a larger Dojo the club moved to 6 College Street and changed name to Wellington Judo and Jujitsu Academy. It was here I obtained my Nidan in Judo and Shodan in Jujitsu. When we moved and formed the new Academy, my business partner, Dave Lowe and I supported the club financially. Eventually the partnership split up and I went to Macau to work. I attended some Judo in China but found it backward. When I returned to New Zealand, ill health stopped me continuing with active Judo but maintained contact with the WJJA. I continued to practice for a few years but have now retired.

During my Judo career, I went to the Kodokan at least 10 times for training. This was mostly with Pat Toner, but several times with Rick Littlewood as well. We would travel for a week and then travel around Japan.
People I have practiced or associated with:
• Pat Toner
• John Burke
• Bob Hannah
• Larry Hiland
• Lawrie Hargreave
• Claire Hargreave
• Rick Littlewood
• Graeme Spinks
• John Haanstra
• Kevin Hart
• Norm Cook